Devinder Sharma, referred to as the Green Chomsky is counted among the “25 Most Valuable Indians” for his distinguished work in food security and trade policies. Internationally sought after as a speaker, he has addressed several parliaments in Europe, been a guest lecturer in many universities all over the world and a keynote speaker in innumerable international conferences. He has addressed the UN Inter-country Working Group on the rights of farmers and those living in rural areas. An award-winning journalist, he is an outspoken critic of industrial agriculture, genetic engineering, and globalisation. He tweets @Devinder_Sharma

Frédérique Apffel-Marglin is Professor Emerita, Anthropology Dept., Smith College, USA. Author and editor of several books, Apffel-Marglin’s interests include political ecology, indigenous culture, and critical approaches to globalization and development. She founded Sachamama Center for Biocultural Regeneration (SCBR) dedicated to the regeneration of both the local ecology and culture in the Peruvian High Amazon. As an anthropologist, she spent over 18 years in Odisha, India. Part 2 of Her book, Rhythms of Life: Enacting the World with the Goddesses of Orissa [now Odisha] documents the festival of Raja Parba that celebrates the menses of the earth, the sea, the goddess, and women.

Nidhi Jamwal is a freelance environment journalist and consultant, who for the past 16 years has been reporting on different online and print media on various environment and development issues, such as industrial pollution, water management, renewable energy, climate change, waste management, etc. She had a long tenure with the Center for Science and Environment (CSE), during which she worked on its Fifth Citizens’ Report on the State of Environment in India. Her recent article Why are we pretending that there isn’t a growing mountain of menstrual waste we need to deal with?  served as a wake-up call on this issue. She tweets @JamwalNidhi

Bayo Akomolafe  is a clinical psychologist, lecturer and author from Covenant University in Nigeria. His readings of ‘knowledge’, ‘development’, ‘progress’ and ‘truth’ as Eurocentric metanarratives led him (and his wife, Ej) to develop the first International Workshop on Alternative Research Paradigms and Indigenous Knowledge Promotion (WARP, 2011). Bayo is the Coordinator of the International Alliance for Localization, and a member of the Global Cooperative Forum in Switzerland. An international speaker, poet and activist, his most abiding interests are the idea of civilizational transitions, localization, the multidimensionality and paradox of ‘reality’ and consciousness, and a radical planetary future.

Aarti is a co-founder and heads Content, Communications and Audience Engagement across media properties at Sattva. She is the Chief Editor of The Alternative, Sattva’s media platform for sustainable living and social impact. Prior to Sattva, Aarti played key technical and mentoring roles in Texas Instruments and AMD. Aarti holds a B.E(Hons) in Computer Science from BITS, Pilani, is a graduate of the IIM-B’s Management Program for Women Entrepreneurs (MPWE 2010) and a Goldmann Sachs-ISB fellow. Aarti is passionate about classical dance and marathon running. She tweets @rtmohan

Bindu Mohanty (Moderator), Ph.D, is a writer, educator and sustainability consultant based in Auroville, which is internationally acclaimed for its sustainable initiatives. As a consultant, she is co-founder of earth&us with experience in the fields of rural development and waste management.  As an educator, she has served as senior faculty for an international study-abroad program, facilitated workshops, and helped in curriculum development. She is passionate about social transformation and the evolution of consciousness on earth and is at her happiest, when she out in nature. 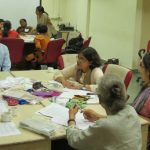 From freedom to responsibility: Join the campaign!Blogs A case for dematerialised lifestyles for sustainable livingBlogs, Whats New